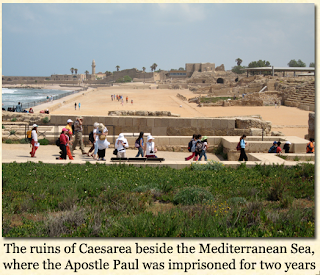 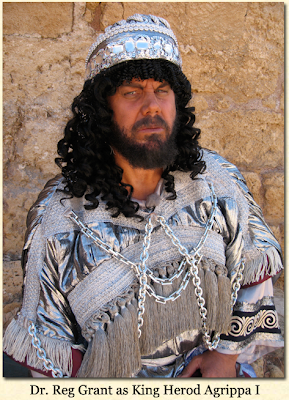 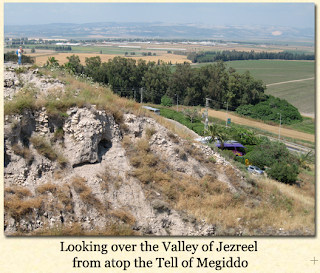 The first day of a tour is always fun because you get to meet the folks on your bus. What a great crew! We boarded the our buses today to head north from the area of Joppa/Tel Aviv to our first stop—Caesarea by the Sea.

The Apostle Peter made this same journey to share Christ with a Roman Centurion in Caesarea (see Acts 10:23-48). What took Peter two days of walking took us about thirty minutes.

At Caesarea, I felt the cool Mediterranean breezes that would have refreshed Paul as he emerged from his prison to make his defense before Agrippa (see Acts 25:1-27).

In the theater, Dr. Reg Grant gave a stirring monologue as King Agrippa, the arrogant ruler who was struck by God in the very theater where we sat (see Acts 12:21-23)!

Back in the bus and headed further north, the scenery reminded me how God designed the land of Israel to be strategic during biblical times. The mountains, valleys, oceans, and deserts forced travelers to journey only on certain routes. The most-used road was the International Highway that stretched from Syria in the north to Egypt in the south—the full length of Israel.

As the highway made its way across the broad Jezreel Valley, it entered a chokepoint at Mount Carmel alongside the city of Megiddo. During the times of the judges in Israel, the Hebrews failed to drive out the Canaanites who lived in Megiddo.

So what? Why not let the inhabitants live in this region since they wanted it so badly? The Lord knew why. Not taking control of Megiddo amounted to not locking one’s doors at night. It played a vital role in national security.

The failure of the Hebrews to drive out the inhabitants defied God’s command to resist the culture. Instead, God’s people tolerated the culture . . . and then eventually embraced it. Their compromise produced disastrous results, as the Lord had said, “Their gods will be a constant temptation to you” (Joshua 2:3, NLT).

It always seems easier to mingle with the culture than to oppose its influence—to find the middle ground rather than stand on our own. But God knows better, and so He commands us, “Do not be conformed to the pattern of this world”; “Flee sexual immorality”; “Do not covet.” God gives specific commands to protect us from experiencing a danger we cannot detect on the outside.

We must guard the critical points of entry into our hearts: church doctrine, music, television, the Internet, movies and marketing. No doubt, obedience comes at a hard price, but not as hard as the results of compromise.

As we consider our culture’s embrace today, we must also consider God’s words again: “They will be thorns in your sides, and their gods will be a constant temptation to you.”

Compromise is never worth its price.

Category: Tours
Disclosure of Material Connection: Some of the links in the post above may be “affiliate links.” This means if you click on the link and purchase the item, I will receive an affiliate commission. (Thanks!) I only recommend products or services I use personally and believe will add value to my readers. I am disclosing this in accordance with the Federal Trade Commission’s 16 CFR, Part 255: “Guides Concerning the Use of Endorsements and Testimonials in Advertising.”