When we think of the Bible’s Christmas couple, of course we picture Joseph and Mary. But there’s another couple in the Christmas narrative. In fact, they appear even before Jesus’ parents do. (Photo: Tradition places the home of Zacharias and Elizabeth at Ein Kerem. Courtesy of the Pictorial Library of Bible Lands)

God had been silent for 400 years. No additional Scripture. No more prophecy. No visions. Just waiting for the Messiah. 400 years! Then, God spoke to an old man in Jerusalem. God had been silent to Zacharias and Elizabeth as well. They were elderly and had no children. They prayed for years. But nothing.

God’s Word makes the point that they were righteous in God’s sight—blameless in God’s Law. In other words, their childless home wasn’t because of their unfaithfulness.

Times of waiting on God can even come to a point of what seems impossible. Most times of lack are like that.

Waiting does not diminish us, any more than waiting diminishes a pregnant mother. We are enlarged in the waiting. (Rom. 8:24, The Message)

God had something special planned for them. And for you.

END_OF_DOCUMENT_TOKEN_TO_BE_REPLACED

The first Christmas looked like a coincidence. From a human perspective, politics set the agenda: Caesar took a census of his people. End of story. But it wasn’t. (Photo: Bethlehem Fields with Herod’s Herodium in background. Courtesy of the Pictorial Library of Bible Lands)

Think about this past year in your life. Many ordinary events occurred. Most of them you don’t remember. But God has been working. It isn’t just the Christmas story.

It’s your story too. God uses the power of providence in your life.

END_OF_DOCUMENT_TOKEN_TO_BE_REPLACED

It’s a good thing we have holidays. Without these forced pauses in our hurried schedules, we would plow through life with only a headstone to stop us. Christmas certainly offers us a time to take a break from work. It’s also a time for family to reconnect. But most importantly, the holiday reminds us of essential truths in our spiritual lives.

Here are 7 Christian Christmas readings from Scripture with suggested themes for personal reflection or group discussion.

You can also download these Christian Christmas Readings if you prefer to print them.

END_OF_DOCUMENT_TOKEN_TO_BE_REPLACED

It’s hard to imagine an omnipresent God dwelling in one place. And yet, every December we celebrate the fact. God dwells in the confines of a human body. And He is also everywhere.

But the incarnation isn’t the first time God has localized His presence among His people.

(Photo: Olive groves near Bethlehem. Courtesy of the Pictorial Library of Bible Lands)

God is both omnipresent and present. King Solomon summed up the seeming contradiction when he prayed:

Will God indeed dwell with mankind on the earth? Behold, heaven and the highest heaven cannot contain You; how much less this house which I have built. —2 Chronicles 6:18

From creation to Christmas—and from today to eternity.

Let’s take a quick geographical journey and follow movements of God’s dwelling place among us.

END_OF_DOCUMENT_TOKEN_TO_BE_REPLACED

The songs play it. The movies portray it. Even our church services have their part to play. “It’s the most wonderful time of the year!” Yeah, well what if it isn’t? For many people, holidays bring up painful memories.

Sore spots from childhood or the loss of loved ones hit hard during this sentimental season. While many people celebrate the joys of Christmastime, others suffer lonely holidays.

During one of the most desperate times of King David’s life, the anointed future king of Israel found himself running from two separate enemies—hardly a time to celebrate. With the Philistines to the west and King Saul to the east, a distressed David sought refuge in the cave of Adullam (1 Samuel 22:1–2).

His situation offers encouragement to us during lonely holidays.

END_OF_DOCUMENT_TOKEN_TO_BE_REPLACED

God’s leading and timing in our lives often don’t make sense. We know that almost 2,000 years ago Joseph and Mary journeyed to Bethlehem. But we forget that approximately 2,040 years before they did, Jacob and Rachel, another expectant couple, traveled south along the same road. Rachel gave birth to Benjamin, but died soon after delivery, and Jacob buried her near Bethlehem (Gen. 35:19). Rachel’s death foreshadowed the devastation that the territory of Benjamin would suffer in Jeremiah’s time:

Yet the prophecy found its final fulfillment in Jesus’ day, when Herod the Great slaughtered all baby boys in Bethlehem (Matt. 2:17-18). So, at God’s direction, Joseph fled to Egypt with Mary and Jesus to live until Herod’s death.

Each movement of Jesus’ family finds its cause in God’s revelation to Joseph:

God’s purposes for these moves lay first in the protection of His Son, but Matthew notes that each directive also fulfilled Scripture. I doubt anyone but God saw beforehand the murky prophecies fulfilled by these geographic moves. But in hindsight, they become clear.

God’s leading and timing in our lives often don’t make sense either.  At least at first.

END_OF_DOCUMENT_TOKEN_TO_BE_REPLACED

On a wintry day in Jerusalem, Jesus walked in Solomon’s Colonnade—the long, covered, columned portico on the east side of the Temple—overlooking the Kidron Valley.

(Photo: Solomon’s Colonnade lay along the eastern wall of the Temple. Courtesy of the Pictorial Library of Bible Lands)

The conversation Jesus had that day occurred at Hanukkah—a celebration the Jews referred to as “the Feast of the Dedication” (John 10:22).

The feast had historical significance, which heightened the passion of those in Jerusalem. They encircled Jesus to ask Him a simple question.

His reply gave them more than they bargained for.

Today, some say Jesus never claimed to be God. But His words during that Hanukkah left little doubt.

END_OF_DOCUMENT_TOKEN_TO_BE_REPLACED

I am excited to show you my free video series on the Birth of Jesus, called “The Promise that Changed the World.” To watch immediately, just click the video below. 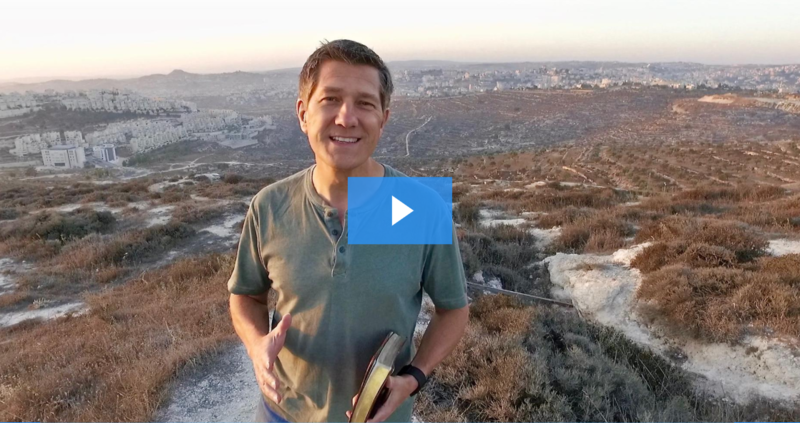 This is the first of 3 videos for you…

This video series will give you a virtual tour to the biblical sites of Christmas. But experiencing the Bible lands not just about pointing to a pile of rocks. It’s about connecting the Bible and its lands to life.

This first video takes you to the places and promises of God that led up the birth of Jesus. The next two episodes release over the next few days and reveal the places of Jesus’ birth and the events that followed—including the Wise Men!

I’m praying God encourages you by what you see.

Invite others to see the videos…

Share these videos with those who would enjoy seeing the sites of Christmas in the Holy Land.

It sounds strange, but sometimes finding favor with God makes life tough. When Gabriel informed Mary she would give birth to the Son of God, many thoughts ran through her mind, not the least of which was how she, a virgin, could conceive. What’s more, Mary knew the social and biblical fallout that occurs for a pregnant woman without a husband. How could she possibly explain that her pregnancy was an act of God and not an act of passion? Finding favor with God meant she faced disfavor from people. Maybe finding favor with God isn’t all it’s cracked up to be?

Christmas usually causes us to marvel at the virgin conception—and at the love of our God who would become Man so that He could die for our sins.

But there’s another part of the Christmas story that amazes me just as much. It comes from this amazing young woman.

END_OF_DOCUMENT_TOKEN_TO_BE_REPLACED

Do you remember the last time God showed up unannounced in your life? Even though the Lord is everywhere always, occasionally He’ll show up in a unique way. This happened to me just a few days ago. I headed to the mall to pick up some last-minute gifts. The traffic crawled along in the wet winter weather. Stuck at a stoplight behind a line of cars, I remembered that a few years ago I had purchased some songs from Celine Dion’s Christmas album.

The familiar melody of my favorite Christmas carol began. With traffic going nowhere, I had a forced moment of complete solitude, and I listened to an angelic voice singing words that resonated with the core of my being.

Long lay the world in sin and error pining, till He appeared, and the soul felt its worth.